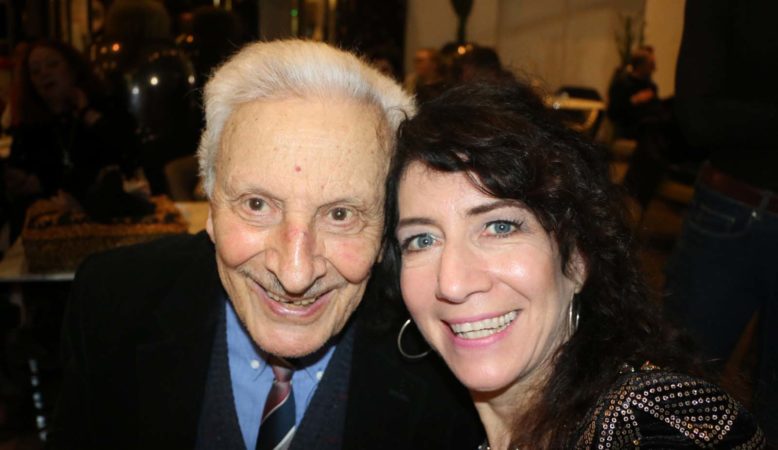 Dimitri Vicheney: A Great Light Has Gone Out In Paris

A great light has gone out in Paris. My beloved, remarkable cousin, Dimitri Vicheney has passed away at age 96. I am heartbroken. We spoke last week on the phone and he sang a blues melody, promising next time we spoke I would play piano and he would sing. As memories flood I weep, and at the same time feel immense joy and gratitude for the gift of his presence on earth and in my life. Here we are together when I went to Paris to see him, and he came to our concert full of enthusiasm and joy!

For me Dimitri is, was, a miracle, a living breathing connection to my long-lost family in France, a brilliant, elegant and refined gentleman who remembered my grandmother and my great uncle when everyone else was gone, and a passionate musicologist and historian of American blues music. Dimitri arrived in my life ten years ago, after I had given up hope of ever finding my family in Europe. Until the spring of 2010 I didn’t even know Dimitri existed! Yet once we met, in his apartment on my birthday in 2010, with two other cousins I met for the first time, my heart exploded. I had the inexplicable feeling something larger than both of us had brought us together so many years after our families were separated.

Dimitri is the reason I traveled to Paris so often in recent years, to spend time with this miraculous person, literally a walking encyclopedia both of the blues and of our family history. Any question I had he knew without hesitation. Name any blues song and he would tell you who wrote and recorded it, who was in the band and in what year. When I brought the family tree my grandmother had made from her own memory in the 1960’s he would add gentle corrections here and there, “the son of this person was Romano, not Dominic”. We would talk and listen to blues music together – blues was one of his great passions, and he had several.

Kindred spirits in music, Dimitri introduced me to blues singers I had never heard of before. He gave me dozens of CDs of blues artists and pointed me towards women pianist/singers/songwriters he thought would fit my voice. Dimitri encouraged me every single time we spoke and asked me when was I going to make a blues album? I took notes as he spoke, trying to keep up with his vast knowledge that spilled out of him so naturally. A pianist as well, he would sit on the couch or at the kitchen table and improvise melodies in the air, singing and playing a piano in the air above his legs and even imitating the trumpet or harmonica parts. He couldn’t believe his lifelong love of blues and gospel music echoed my own path in music, and each time we were together he mentioned what a remarkable turn of events that we would meet in this lifetime, asking how was it possible we hadn’t met sooner? He corrected my French with laughter and gentleness, for the many mispronunciations I made or when I (often) didn’t know the right word in French he would surprise me with the correct word in English. And I loved hearing him speak in Russian, which reminded me of my mother. Every time we spoke on the phone he was working on a project, writing liner notes for another blues album, choosing songs for new CD collections of blues or gospel music, including a powerful collection called Hard Time Blues released in 2014, or preparing presentations for the 15eme historical society in Paris, or rewriting chapters about his illustrious, luminary grandfather, Alexandre Benois.

Dimitri was born in 1924 in Paris in an artistic family: his mother, Hèlene Benois (daughter of Alexandre Benois) was a painter, and his father, Ivan Wyschnegradsky, a renowned Russian composer of micro-tonal music. Dimitri fell in love with the blues during World War II and became one of France’s noted historians of American blues music with the nom de plume, Jacques Demêtre. In addition to meeting blues and jazz musicians who performed in Paris after WWII, Jacques (Dimitri) came to the United States in 1959, visiting Detroit, Chicago and New York, meeting and interviewing Howlin Wolf, Muddy Waters, John Lee Hooker, Tampa Red, Kokomo Arnold, and countless others, and was invited to stay at the homes of Champion Jack Dupree and Sammy Price. One of the first French researchers/writers of American blues musicians and music, his pioneering adventures and photographs are documented in his book “Voyage au Pays du Blues” and in columns for Jazz Hot magazine.

There is so much to write about my remarkable cousin and the cherished time we shared together. If you are still reading this far I thank you, and invite you to join me in celebrating the life of an incredible, irreplaceable gentleman who loves the blues and who lives on in the hearts of all who loved him. I know he will live on in my heart and in my music for the rest of my life. I love him too much to say goodbye, instead will say au revoir Dimitri, until we see one another again and you can sing while I play the piano. You are always in my heart. Je t’aime. I can’t imagine life or the blues without knowing you are in it.

Jacques Demêtre: Discovering a Blues Historian In the Family