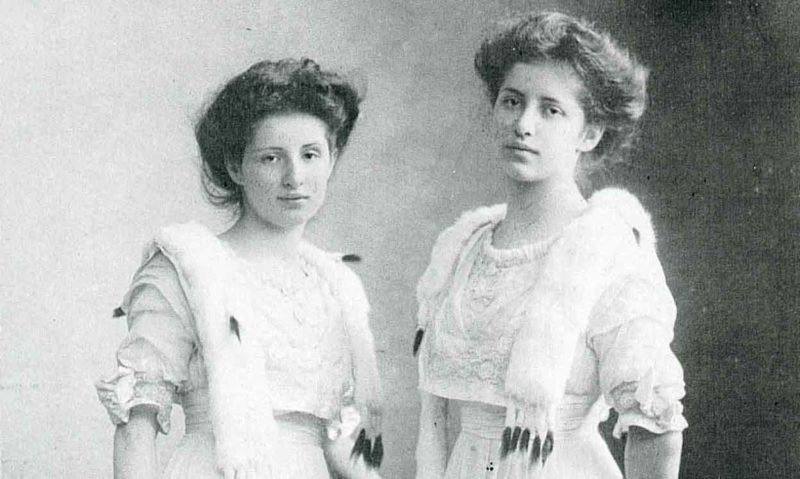 In 2019, an incredible document was sent to me. I had no idea it existed until I opened the pages and began to read, a miraculous window opening and breathing life into a long-lost story which, for my entire life, has been a mystery. One hundred years ago, a young woman Marie (Marusa) Cavos and two of her siblings fled St. Petersburg, Russia. It was 1919, just after the Russian Revolution. St. Petersburg was in chaos. Marie and her two sisters left on foot, leaving their younger brother Eugene Cavos, crippled from polio in childhood, in the care of their cousins. Their mother, Ekaterina Zarudnaya Cavos, a well-known painter, died in 1917 apparently from a hunger strike. Less than a year later, their father, architect Eugene Cesarovich Cavos, suffered a fatal heart attack while boarding a train, leaving young Marusa and her siblings alone in turbulent times.

The Cavos house on Kamenostrovsky Prospect, built by Eugene Cavos for his family, was claimed by the new government. As the eldest child, Marie signed all the family possessions, furniture, paintings, china, books, to the Russian Academy of Arts and Sciences. Did she imagine one day to be able to reclaim her home and belongings?

Marie and her sisters, Nathalie and Catherine, left St. Petersburg on foot, with only what they could carry. The three women ran into a squadron of US soldiers, who informed the sisters that they were heading in the wrong direction and would run straight into the Bolshevik revolutionary army.

The sisters changed direction and somehow made it to Revel (now Tallin), Estonia, in 1919.

Some time later Marie and her sisters arrived in Paris, joining thousands of White Russian emigrés in the City of Light. They found apartments in the 15eme arrondisement, not far from other cousins on the Cavos/Benois side of the family.

Marie Cavos was my grandmother. For years I have been researching the many mysteries around her life, both before and after 1919, wondering what their lives were like in St. Petersburg, puzzling over how she and her sisters made it to Estonia and then to Paris, who they left behind in St. Petersburg, how they managed in Paris during the 1920’s and 1930’s, surviving in occupied Paris during World War II and then my grandmother fleeing once again, this time through France to Portugal and taking a boat from Lisbon to New York City with her husband and young daughter, in April, 1941. Four siblings, separated and shattered by war and revolution.

To my utter astonishment, in 2019, exactly one hundred years after my grandmother Marie left Russia in 1919, a copy of her memoirs was sent to me by a cousin in St. Petersburg. Upon reading them I cried, I marveled, I couldn’t believe what I was reading. It was as if my grandmother’s voice had come to life. To have this document today, in 2019, on the centennial of when her life in exile began, is truly a miracle. What an incredible way to begin a new decade, with all the discoveries yet to be found!

In the coming months, I will write more about the music that runs through so many generations in our family and about my grandmother’s memoirs, a historical portrait of yet another immigrant story: memories of a woman who fled revolution and war in two countries, leaving everything behind, living in poverty in Paris and finally arriving in New York with her young daughter to start recreating her life all over again.

Ahhh at the ocean..... waiting for my new transatl

Follow Valerie
This error message is only visible to WordPress admins


Error: API requests are being delayed for this account. New posts will not be retrieved.